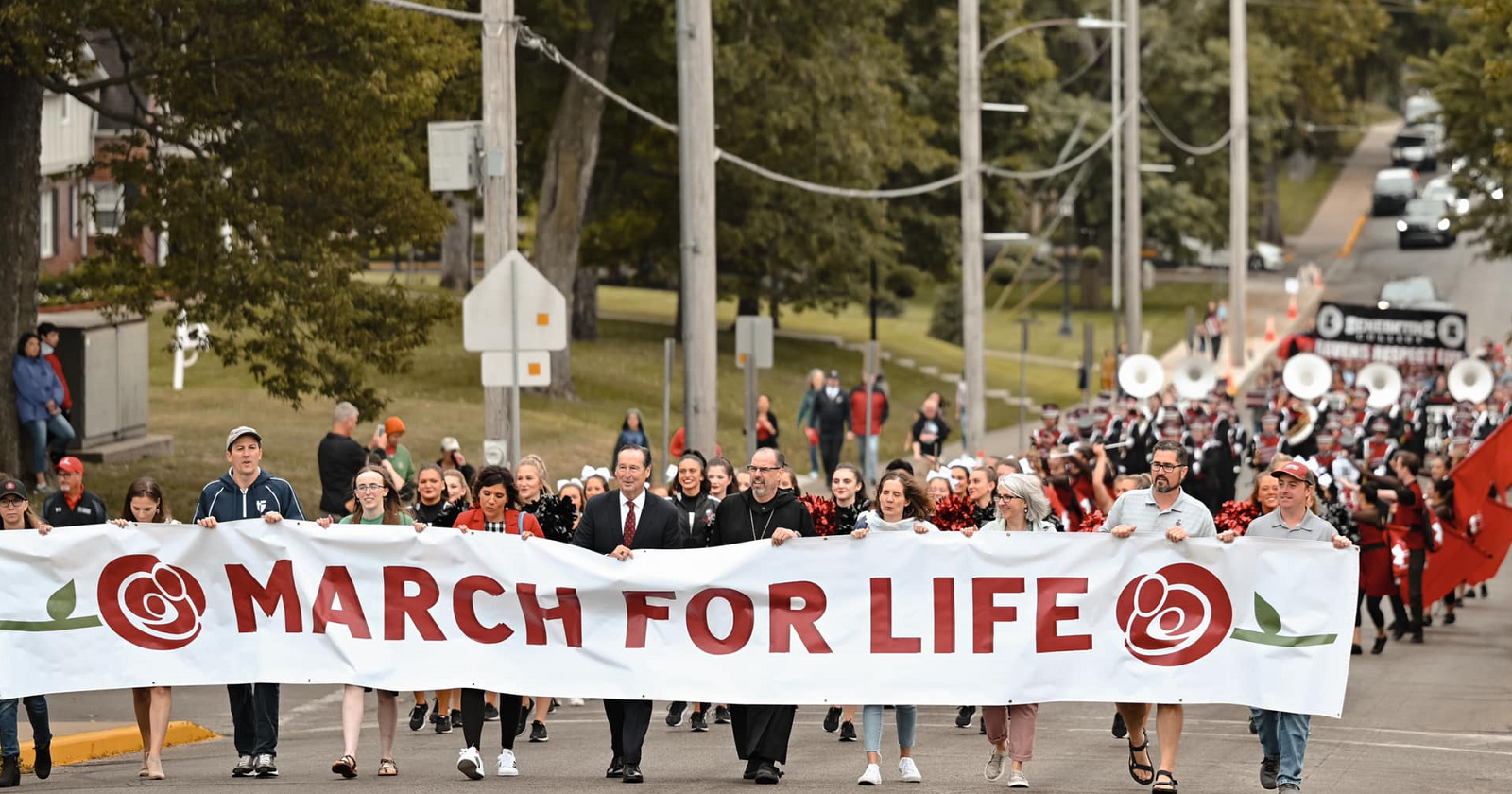 What do you do when you march for a cause for years, and then see your goal realized? You celebrate!

The Supreme Court overturned Roe v. Wade this June, so Benedictine College in Atchison, Kansas, held a daylong celebration honoring those who worked for years for that outcome. National pro-life speakers visited campus to celebrate Sept. 10 and rallied hundreds of students and alumni for the next phase of the pro-life movement, after Roe: Changing hearts and helping women. The event was set up to resemble the experience of the annual March for Life each January in Washington, D.C., complete with a march to the campus football game.

See video summary of the event here or below.

“We knew the day would come when Roe would fall and we knew, at that moment, our movement had to be ready,” said Kristan Hawkins, president of Students for Life of America a national organization that recently awarded Benedictine College an A+ for its pro-life stand. “We had to be ready on every campus, in every community, and at every state capital. We had to be ready to lead.”

“And now, our marching orders could not be more clear,” said Hawkins. “As a community, we must do more to ensure that no woman stands alone. To show that for 50 years we’ve been supporting and sustaining an entire social safety net. And we’re not going away. In fact, we’re redoubling our efforts and increasing support.” (See Kristan Hawkins’ remarks here or below.)

“As the pro-life college in America, we are proud of the work everyone here has done for the pro-life movement,” said Benedictine College President Stephen D. Minnis. “I would like to thank everyone here. Everyone who attended the National March for Life. Those who prayed outside abortion clinics. Those who participated in the Justice for All training. Those who dialogued with students on the KU campus and did other sidewalk counseling. Those who visited the aged in nursing homes. And those who support the culture of life in everything you do.”

Minnis recognized representatives of St. Benedict’s Abbey and Mount St. Scholastica Monastery who have supported the pro-life movement and singled out students who had interned for the Value Them Both organization in Kansas and together knocked on over 40,000 doors in 72 cities. He also recognized representatives from each decade of the Ravens Respect Life organization on campus.

“We will continue to fight for the day when every single person is seen as more than a choice,” Melissa Ohden said. “I was more than someone’s choice to abort. It was not my biological mother’s right to try to end my life.”

Ohden tearfully referenced her own daughter when she spoke of not only the 64 million lives lost to abortion in the last 50 years, but also the loss of generations of children they would have had.

“On behalf of 64 million children who never had the opportunity to thank you, who I was meant to be, I just want to give you this word of thanks today for fighting for us. For seeing our humanity and for working alongside all of us to build a culture of life for generations to come,” she concluded.

Speaker Dr. Bruchalski now runs the largest fully pro-life ob-gyn practice in the nation and speaks to medical professionals, encouraging them to follow Christian principles that reflect the dignity of the human person and the unity of body and soul.

“Abortion is not healthcare,” Bruchalski said. “Medicine is dead because we bought the lie of elective abortion as good healthcare. The elective abortion, the direct and intentional killing of the unborn in the womb of their mother, is not good medicine. I know first-hand because I performed that brutal and bloody murder that we euphemistically call the termination of pregnancy.”

He said that abortion is so abhorrent to the general population that proponents use the term “pro-choice” and will rarely say the word “abortion” in a speech.

He ended his speech on a note of hope, looking at the young college students in the gathering.

“To see the people here at Benedictine, yes, there is hope,” he said. “We can cure the hardness of heart that I had.”

Benedictine’s President Minnis acknowledged Dr. Bruchalski’s challenge and announced that the college has signed a collaborative affiliation agreement with Catholic Healthcare International on Sept. 8, the Feast of the Nativity of the Blessed Virgin Mary. The agreement begins the process of establishing a new medical school on the college’s campus, the proposed St. Padre Pio Institute for the Relief of Suffering, School of Osteopathic Medicine at Benedictine College.

“We no longer live in a nation where abortion is an uncontested norm, endorsed by the highest court in the land,” Students for Life president Kristan Hawkins declared. “Today, tomorrow and the next day, you are called to speak about the violence of abortion and the extremism of those who advocate for it. You must not allow yourself to be silenced because of your pro-life stance.”