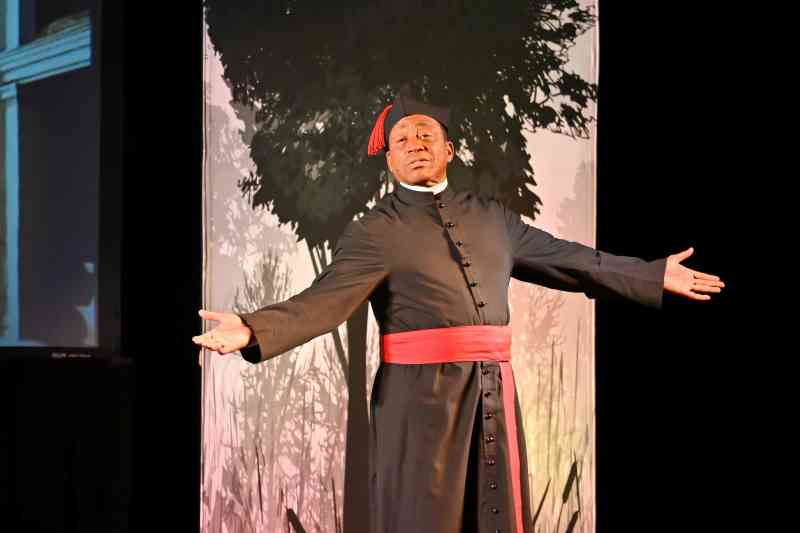 That’s the unspoken message “Tolton: From Slave to Priest,” a one-man multimedia show about America’s first black Catholic priest that was presented Oct. 9 at Benedictine College in Atchison, Kansas.

St. Luke’s Productions created the show, which doesn’t pretty up the story if Father Augustus Tolton. It shows the good of Tolton, the bad of his circumstances, and the ugliness of the racism he faced inside and outside the Church.

“I was surprised about how open and honest the production was, and how frankly it showed the racism within the Church,” said Dr. Edward Mulholland. “But also, how that racism was not institutional, but just the actions of certain members, even if many. The Catholics most in touch with the Gospel seemed to transcend the racism of their time.”

Mulholland, the Sheridan Chair of Classics at Benedictine College, introduced the evening performance of the show.

“Father Tolton’s story needs to be told,” says Coleman, who lives in Florida with his wife, Robin, and six children. “As a black man, this very important part of history is something that I want the world to hear about. I truly feel blessed to be the one to share Father Augustus Tolton with all who will listen”

The show is one of a number of efforts Benedictine College regarding its new Transforming Culture in America strategic vision. The college’s plan says: “The global Catholic Church which embraces the world’s races and cultures is our model for diversity. The college will develop initiatives to attract students, faculty, and staff from all backgrounds and cultures who can benefit from and contribute to its mission.”

In support of that priority, the college consulted with Danielle Brown, the associate director of the U.S. bishop’s anti-racism efforts. She is now a member of the Benedictine College board of directors. The college also created the Freedom Fellows, which provides six full-tuition scholarships for first generation college students and is directed by Tyler Shepherd.

“It was Father Tolton’s eyes on a holy card on a shelf in my office which compelled me to tell this story,”  Defilippis said.

Tolton was born into slavery in Missouri. He was baptized Catholic, but his baptismal certificate says: “A colored child born April 1, 1854, son of Peter Tolton and Martha Chisley, property of Stephen Elliott.”

His father, Peter Paul Tolton, of Brush Creek, Mo., went to fight for the Union in the Civil War, where he was presumed a casualty of war. Tolton’s mother, Martha, escaped Missouri with her 10-year-old-son into Illinois. She had to cross the Mississippi River and dodge Confederate bullets to lead her son to freedom.

She brought her son to Quincy, Ill., where the boy faced further persecution as he tried to get an education. When no U.S. seminary would accept him Tolton studied in Rome and was ordained on April 24, 1886 in the Basilica of Saint John Lateran, with the intention of heading for Africa as a missionary. However, God had other plans. Augustus was sent back into the hostile environment of his own hometown of Quincy, Ill. His popularity with both black and white Catholics caused other priests and area ministers to fight back at him out of jealousy.

He was transferred to Chicago where he struggled to start a new parish, traveling to raise money. He collapsed from heat exhaustion died on July 9, 1897, at the age of 43. Cardinal Francis George introduced his cause for canonization in 2010.

“I really appreciate how the stage was used to set multiple scenes and the boxes gave the actor the ability to show tension, sadness, and excitement through his positioning and body language,” said Noah Federoff, a Sophomore from Tucson, Arizona.

Mulholland said the presentation resonated with the college mission. “I think this brings us to the roots of theatre, to share stories that inspire us to live better,” he said. “We can learn from the mistakes of the past and emulate the heroes in our midst. ‘Tolton’ is a story both Catholic and non-Catholics need to see.” 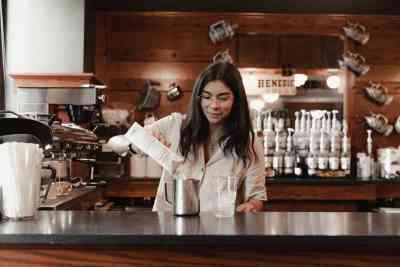