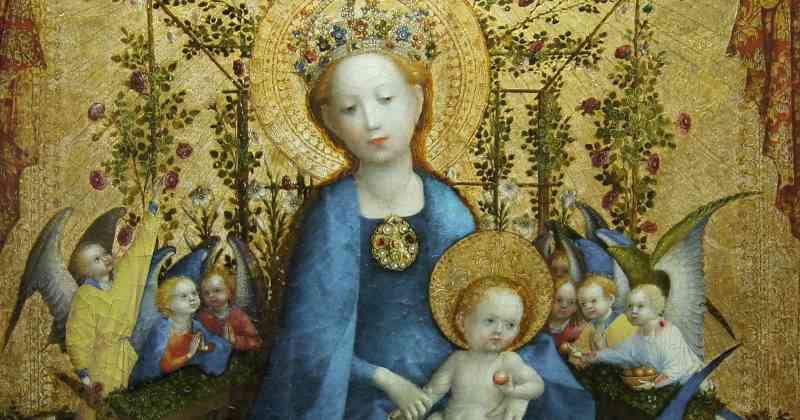 What appears as a simple scene of the Virgin and Child in some far-away heavenly place is indeed much more. Angels surround the child in adoration and praise, and so the one upon whose lap he sits is not simply mother, but the mother of one who receives the adoration of angels: the mother of God. And like glorious realities of God, the actions of the scene are simple and direct, yet provide seemingly endless details that reward the viewer for close observation, giving ample fruit for contemplation of the most sublime mysteries. Like the Incarnation, it is grounded in the familiar earthly experience of earthly things: mother, child, grass, flowers, fruit and musical instruments.

Yet angels play those instruments and offer that fruit and those flowers. The familiar and the common is brought to a believable-yet-unbelievable heavenly perfection, where all is infused with supernatural serenity, active quietness, and the intersection of humanity with angels and even the persons of the Trinity. Stefan Lochner’s Madonna in the Rose Garden, then, does not portray a moment in earthly life of Christ, but the hoped-for glorious life of every Christian: the uniting, like a bride and groom, of God and his creation.

Joining of Heaven and Earth
Importantly, rather than portray a view of something, the painting gives a view into someplace. Angels in the upper corners pull back a scarlet curtain, allowing a view to a hidden heavenly realm. The radiance and light of the glorified world spills into earthly time and space, wrapping the viewer in a vision of his own future. God the Father and the Holy Spirit appear at the top, calling to mind not only the actions of salvation history, like the Annunciation, but the eternal worship of the saints who finally see God face to face for eternity.

Though at the top corners the drawn curtain suggests the figures are behind it, the grass extends out toward the viewer, joining the ordinary ground of earth with the ground of the heavenly garden “projecting” the scene outward toward the viewer in a kind of reverse perspective. This connection between heaven and earth is confirmed further a tour de force move which requires the most careful and prayerful examination. The large blue sapphire atop the Virgin’s crown shows a tiny white reflection, barely half an inch in height. A close examination shows that the tiny reflection is made up of two tall church windows that would be behind the viewer, establishing that she and Christ are not far away, but enter in to the very space of the earthly church building.

The New Garden and the New Temple
The Mother of God sits serenely upon a red pillow trimmed with pearls, but this cushion is not atop a great throne. Rather, in her lowliness, she sits close to the ground atop a grassy area filled with violets, tiny flowers traditionally symbolizing smallness and humility. Unlike the violets which tie her to the ground, roses—the queen of flowers—surround her head, and a golden-clad angel over her right shoulder has already picked a red rose for her and is reaching for another. White lilies symbolizing spotless purity bloom behind her, and a spikey acanthus blossom, long associated in the classical world with virginity, blooms to her left, just above the lute-playing angel’s left hand.

Yet precisely because of her virginal lowliness, she has been raised up to bear Christ in her womb and become Queen of Heaven, crowned with gold and gems. Rather than sitting on a throne, she becomes a throne for God himself. The large brooch upon her chest signifies her queenly status, and contains an image of a maiden with a unicorn, a reference taken from the second-century Christian allegorical text called the Physiologus, which spoke of the unicorn as an elusive animal which could only be captured by resting in the lap of a virgin, an obvious allegory of Christ who now sits on the lap of the Virgo virginum, the Virgin of virgins.

All in all, the Virgin sits in a garden because she herself is compared to a garden, her own body a delightful place where the Son of God choose to dwell with men, a new and better temple allowing God to dwell with his creation. The Jerusalem Temple of the Old Testament was understood to be a small “heaven” where God and humanity met in a new garden which replaced the fallen Garden of Eden. Because the Virgin became Mother of God, giving him her own flesh, God came to dwell among his people as the Incarnate Christ, binding heaven and earth forever in permanent union, raising the earth up to heavenly glory as the meeting place with God. Virgin in the Rose Garden might just as well be called “the hoped-for garden of every Christian”; it allows the worshipper to see “beyond the veil” and encounter the perfection and serenity of what the Book of Revelation 21 calls the new Jerusalem which is “prepared as a bride” to be the dwelling of God with humanity.

Unity, Complexity, Harmony
A hymn to the Virgin from the Divine Liturgy of St. Basil the Great reads: “O Sanctified Temple and Rational Paradise! From you, God was incarnate and became a child…He made your body into a throne and your womb he made more spacious than the heavens.” Lochner’s tiny painting, which measures a mere 20 inches high, imitates the endlessly fascinating reality of the Incarnation itself. When God became flesh, he took all of creation upon himself and united it to the loving God, a simple act with infinite consequences providing for never-ending theological contemplation. Though at first glance The Virgin in the Rose Garden presents the unified simplicity of a woman with a child sitting in a bucolic setting, it then presents layers of fascinating detail like the womb of the Virgin itself: strawberries in the field symbolize the blessed souls in heaven, angles with wings like peacock feathers symbolize glorified eternity, apples being offered to Christ to signify the undoing of the poisonous fruit eaten by Adam and Eve. To ponder the mysteries of the painting is to ponder the mysteries of God himself: profoundly simple and endlessly fascinating.

This appeared in Magnificat. 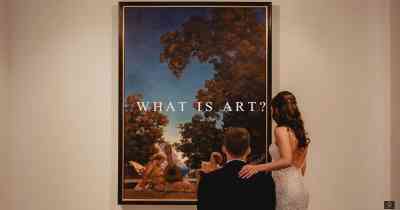