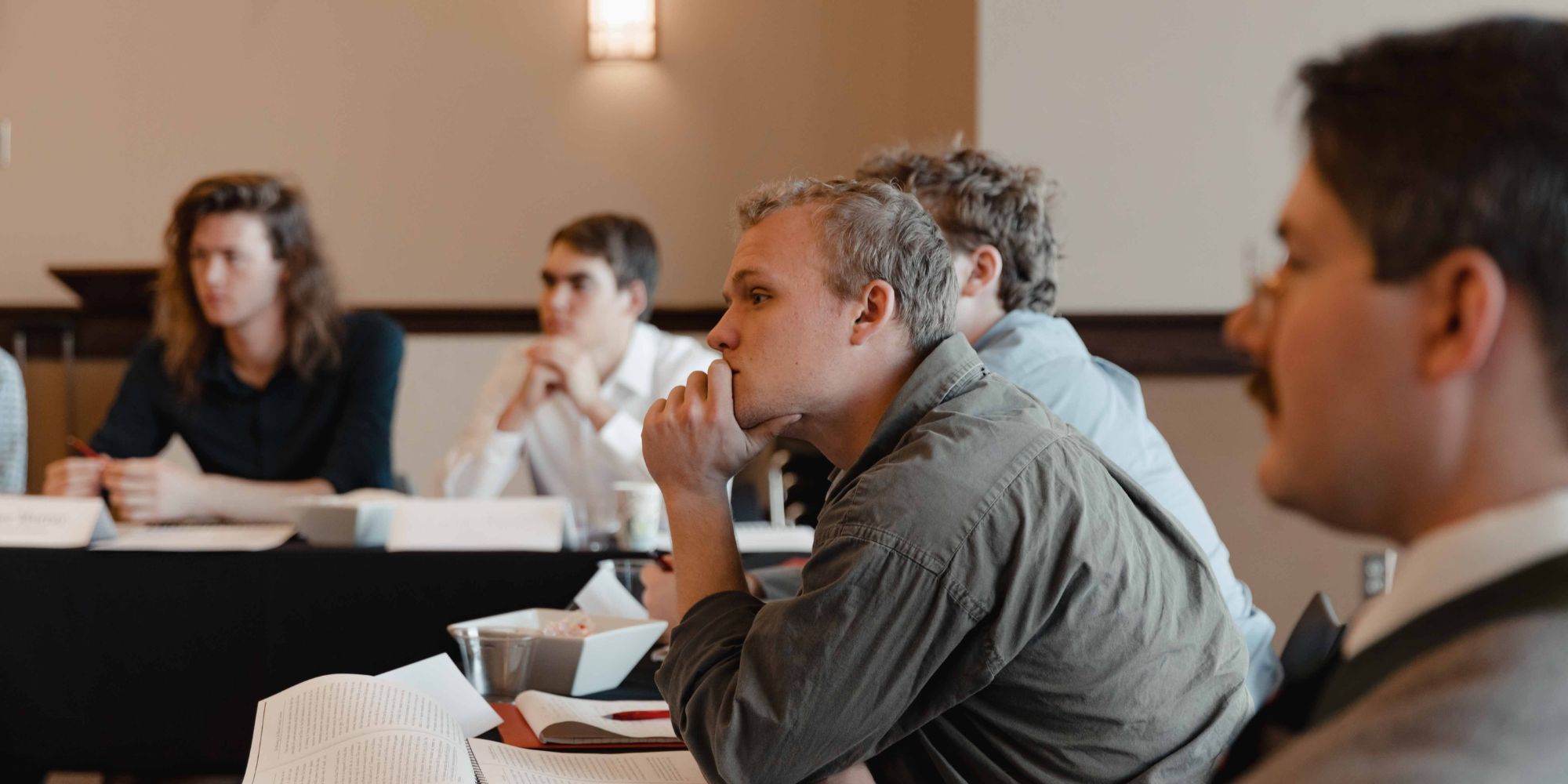 In his encyclical Laudato Si’, Pope Francis called for conversations between believers about how we are shaping the future of our planet. Over Benedictine’s Fall Break, the Center for Integral Ecology provided students an opportunity to come together and have these conversations, based on the teachings of the Catholic Church.

Co-sponsored with the Newman Institute for Catholic Thought and Culture at University of Nebraska Lincoln (UNL), the Center for Integral Ecology hosted a colloquium weekend on the topic of Religion and Ecology titled “Recovering Integrity of Life in Ourselves and in Creation.” Eleven students, about half from Benedictine and half from nearby universities, spent the weekend discussing the Church’s teaching on care for Creation.

The students prepared by reading works from writers such as Joseph Cardinal Ratzinger (Pope Benedict XVI), Pope Francis, contemporary scholar Christopher Thompson, and novelist Wendell Berry, all of whom provided unique perspectives on the topic. The weekend was filled with sessions of discussion, facilitated by staff from both Benedictine and UNL.

Center co-director Dr. Matthew Ramage, one of the primary facilitators of the weekend, said that conversations were both deep and lively, adding that “there was never a dull moment over the course of the weekend’s discussions—both the formal ones and those that took place over breaks.”

Conversations about the intersection of Religion and Ecology drew students from all backgrounds. Ramage observed that “it was very unique to hear insights being brought to bear from individuals majoring in fields from theology to engineering to English, psychology, evolutionary biology, nursing, and beyond.” One of those students, a Benedictine sophomore and aspiring biology teacher Leah Mages, reflected on the weekend, saying that she hopes to encourage her students someday “to think more about the environment around them, how to take care of it in an integral way, and to cherish it better.”

One of Mages’s biggest takeaways from the discussions was the need to resist, as Pope Francis terms it, throwaway culture: “We cannot be drawn into the consumerist, throwaway culture, but rather must act more generationally—meaning embracing a way of producing and preserving for our own and future generations as a cycle. We cannot think indifferently about this Earth we live on, but must respect the dignity of how we use the resources the Earth gives us and how we give back.”

Ramage hopes that this weekend will help the Center for Integral Ecology continue to make an impact on Benedictine’s campus and beyond in several ways. He said that “the experience served to demonstrate to students that integral ecology—care for the created order as well as the most vulnerable humans within it—is a vital feature of Catholicism that merits serious attention and which can be addressed with academic rigor in a uniquely interdisciplinary way.” He also hopes that “this event is not just a one-time affair but that we can replicate it in the future for the benefit of more students—and thereby ultimately for the good of the rest of us.” 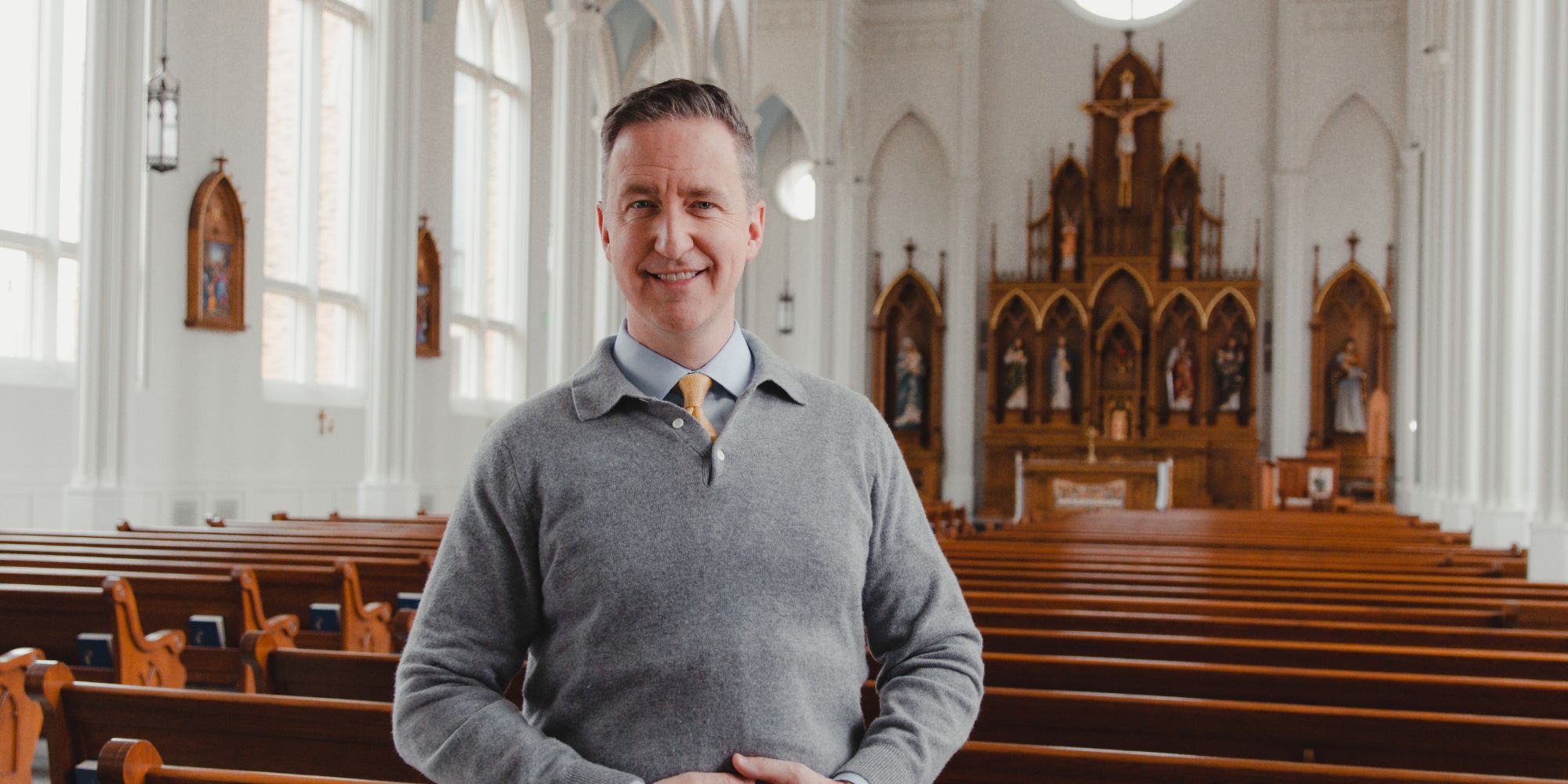 Dr. Denis McNamara, associate professor and Executive Director for the Center for Beauty and Culture, recently published a new book! Titled Solemnities: Celebrating a Tapestry of Divine Beauty, it is a beautiful heirloom providing inspiring background information on each of the 17 Solemnities in the Church calendar. It includes stunning, full-page pictures of Catholic sacred art and ways to bring the Solemnities to life in your heart and home. For this book, McNamara partnered with Christopher Carstens, co-host of The Liturgy Guys Podcast, and Alexis Kazimira Kutarna, liturgy and liturgical music expert.

Here is an excerpt from the book:

“Though Christ is as tall as a two-and-a-half-story building, his face is kind. Though he clearly has the power over life and death, he is calm and ordered. His power shows the strength of wrath, which is not moody anger, but God’s desire to set things right and restore the world by defeating the power of death. Christ’s Last Judgment, then, is good news for the world — at last the application of the restoration wrought by the Paschal Mystery is complete. Here Christ’s unquestionably peaceful perfection combines with his dynamic salvific activity.”

You can pre-order your copy from Ascension Press here. 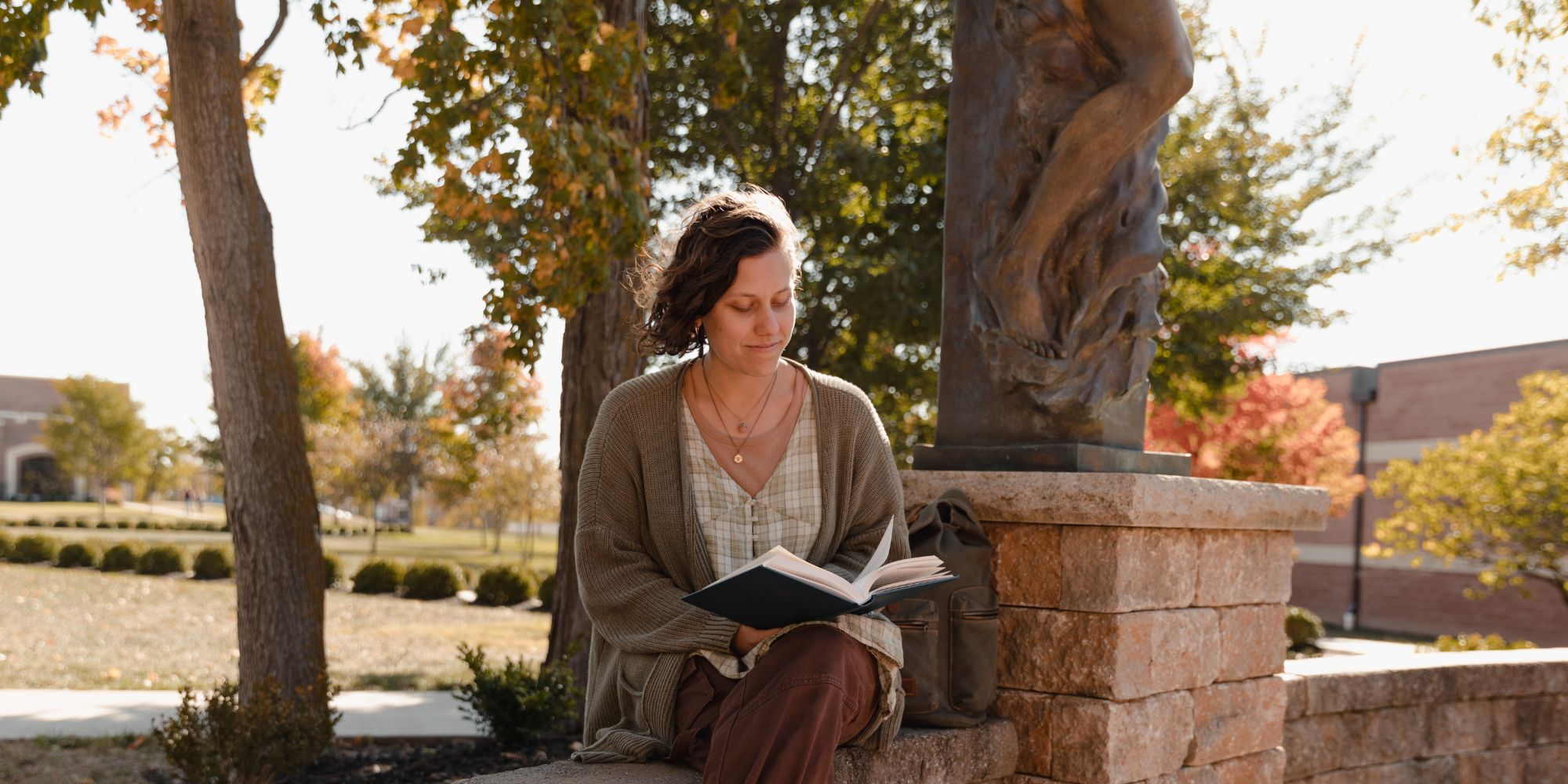 Because Pope Saint John Paul II and Atchison, Kansas, are an increasingly common pairing, Benedictine senior Olivia Shingledecker has grown to love both through her experience in the John Paul II Fellowship program. Hailing from North Carolina, she has found a new home on the bluffs of the Missouri River.

As a Fellow of the Center for Family Life, Shingledecker has devoted much of her time to building up students from suffering families in and around the Atchison community. During her time at Benedictine studying philosophy and theology, she has gotten to participate in what she calls a “richly diverse environment of learning” and take advantage of the wealth of knowledge that her professors provide.

“The John Paul II Fellowship has enhanced my experience of community both by giving me a stable community with the other fellows and by encouraging interaction with the Atchison community. Working with at-risk children in Atchison has opened my eyes to the difficult experience of many locals in the town I love so much and has given me a desire to partner with them! I also enjoy the aspect of being able to share with my fellow students how the faith penetrates our lives on a weekly basis.”

“This fellowship has enhanced my experience of scholarship as we read and discuss ideas together, notice them in our lives and then put them into practice. Learning about John Paul II’s theology of the family translates into our work with Atchison children and completes the experience of community, faith, and scholarship that this fellowship offers.” 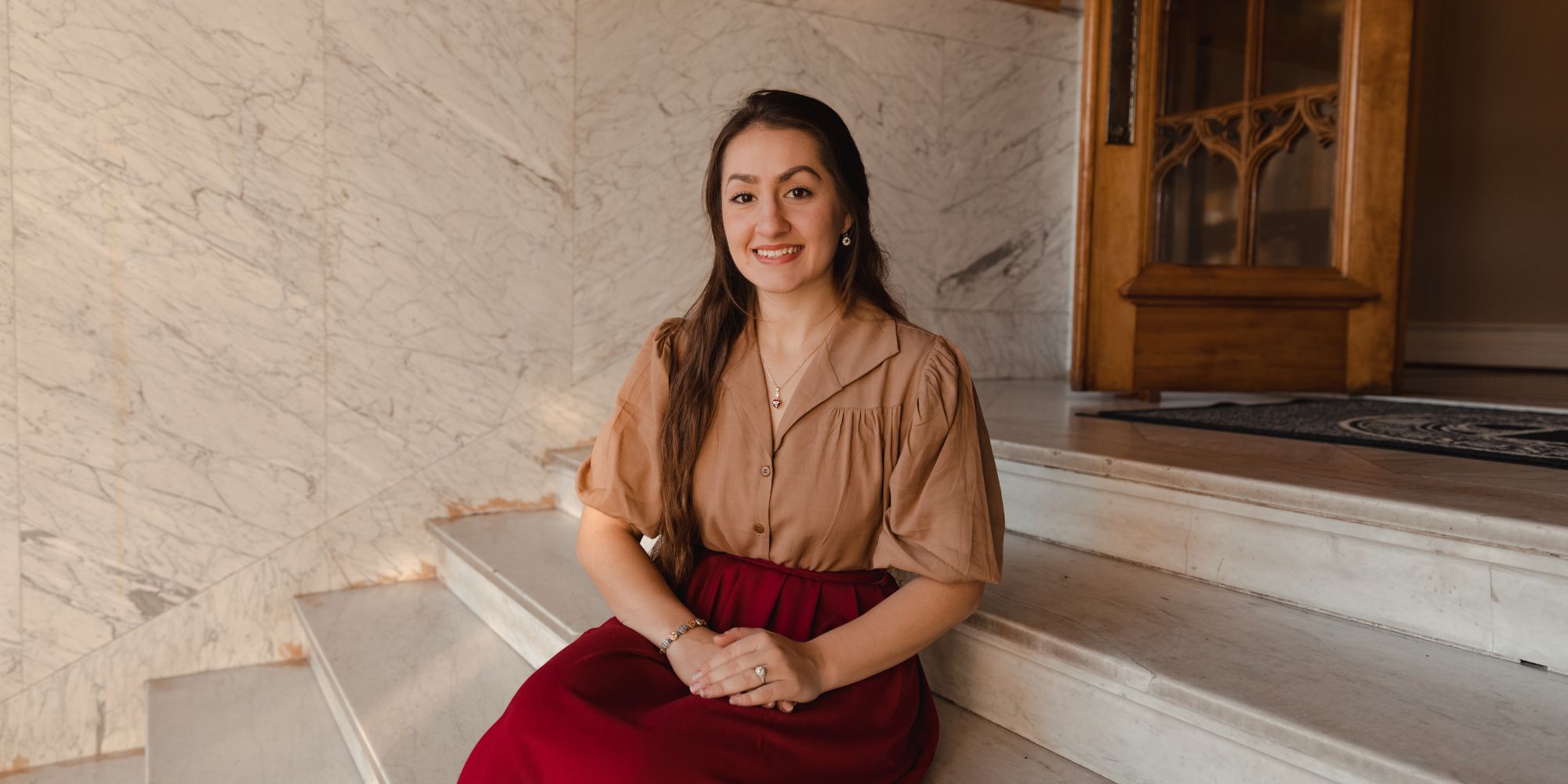 When first visiting Benedictine College as a prospective student, senior Celeste Lirette had high hopes about becoming a Raven. Not only were her hopes met, but she found unexpected allies in transforming culture through Beauty during her time as an Angelico Fellow, the Fellowship program for the Center for Beauty and Culture. A Liturgical Music major from Louisiana as well as a talented choral conductor, she has received many opportunities for growth through the Center for Beauty and Culture, including funding for a study abroad program in Germany, which she said will shape the rest of her life.

“My involvement in the Angelico fellows has enhanced all three of the Benedictine pillars of community, faith, and scholarship in my life. I have met, networked, and worked with so many great students who are also fellows. As our fellowship caters specifically to artists and those in adjacent fields, it has been invaluable to meet those who are passionate and commit their lives to beauty as I do. I know who else will be working in the culture to evangelize through beauty, and I will lean on them for a common mission forever. My faith has been confirmed and strengthened by not only the witness of all the Angelico fellows, but the education I receive in our meetings also exposes me to ways I can personally grow in holiness, as well as be a leader to my friends, family, community, and world. ”

Celeste was pleasantly surprised to discover that all her hopes as a prospective Raven were fulfilled during her time at Benedictine. “The enthusiasm I had for this mission as a prospective student and as a freshman has not faded over time, but it has grown and been confirmed by the people, organizations, and fruits placed before me. I have seen and experienced beautiful liturgies, holy friendships, remarkable scholarship, growth in virtue, support for the needy, and celebration of all treasures the Church and our Christian culture have to offer. The surprise was that the hope I tasted in my first encounters with Benedictine were grounded in reality; a community rooted in Christ, a life worth living, surrounded by beauty…it is all real and truly possible.”